Join for our live streamed Sunday School (9:30am) and Worship Service (10:30am). You can view the service HERE. 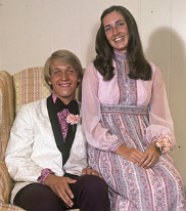 When I was 16 I was a convinced and dogmatic atheist who hated all forms of religion. In September, 1970 I was in the cafeteria of Walter Johnson High School in Bethesda, Maryland. I overheard a fellow member of the WJ soccer team, trying to convince a couple of guys on the football team to come to something called Teen Breakfast Club, which I had never heard of. When he finished (they refused) I went over to him and asked him if I might be able to come. (I had gone to and enjoyed some Teen Club events in junior high and assumed that this was something similar.) That evening, my friend's friend called me to say he’d pick me up for "TBC" at 5:30 on Thursday morning. On Wednesday evening I went to youth choir practice at River Road Unitarian Church. There I mentioned to my friends/fellow choir members that I was going to TBC the next morning. They were horrified. "That’s a Christian thing which meets at a church!" I had no idea, and by the time I got home it was too late to call to cancel, and I didn’t have anybody’s phone numbers anyway, so I had to go. So I was picked up the next morning and driven to Fourth Presbyterian Church, where well over 100 high school kids were gathering for a pancake breakfast, singing, skits and a talk. I have no recollection of what the talk was about and probably didn’t understand any of it, but I left that place cheered and impressed by several things. Never had I met peers who came up to meet me, looking me in the eye, shaking my hand and inquiring about me. Not only that, but never had I been with a group of peers who all sang. I enjoyed singing and had been in choirs and singing groups for years, but here suddenly EVERYONE was singing, from popular football players to what today we would call geeks. And they were doing so with vigor! Wow! And finally, the skits were not only hilarious, but the goofy character in the skit was played by none other that the youth pastor! Anyway, I willingly agreed to come back the next week. This went on for about 8 weeks and then they began to talk about a weekend retreat somewhere in Pennsylvania. For some reason they wanted me to go, and when I was hesitant, they removed all my excuses: they said I wouldn’t have to pay, they said they would loan me a sleeping bag, they said they’d pick me up and drop me back off at home. So I reluctantly went. Through the first part of the retreat, I don’t think I really grasped the Christian stuff they were talking about. I was so ignorant that it just went over my head. (I had never heard anyone say that Jesus was the Son of God. I knew he’d died on a cross because of my relatives' crucifixes, but I had never heard that He supposedly had been raised from the dead.) I was having a blast but I have no memory of connecting with the talks. I do remember when the kids in each room gathered each evening with their "counselor" to talk about the day. When it came to my turn, I had nothing to say. Nothing at all. And I couldn’t even explain that I had nothing to say or why. But still there was something very appealing and compelling about being there. There was a love in that group that I’d never experienced before. The Lord had begun to work in my heart to draw me to Himself. Sunday morning’s talk was on the love of God in Christ (it’s the only one I remember). Afterward the youth pastor sent us all outside and told us to return after a half hour if we wanted to be followers of Christ. As I look back at it now, it seems to me like I had been asleep my whole life before that day, and suddenly I awoke. I still didn’t know much at all. But two things I knew in the bottom of my soul like nothing I’d ever known before: 1) There was a God, and 2) He was mine. I came back in after the half hour with no uncertainty. At that point, nothing could have kept me from going back into that room. From that point on everything in my life was radically different. And now, after over 50 years, I have no regrets. The journey has been harder than I thought it would be. I have failed more often than I could have ever expected. At times I have chafed at the unpleasant parts of my journey. But the difficulties have been accompanied by many, many sweet and pleasant blessings, including dear family and friends, amazing experiences, spectacular beauty, and above all, the friendship of the Lord. As we sang at that retreat in 1970, I can still say, "He’s everything to me."